Genuine Technology Group is a leading MSP and trusted advisor to clients across industries, including local governments and critical infrastructure where security is mission critical.

Following the implementation, one of its clients requested a penetration test to assess the effectiveness of Genuine’s security stack and system configuration. The goals of the test included:

Ernest and the penetration tester designed the test as an assumed breach. They decided the tester would attempt to spread laterally across Todyl’s Secure Global NetworkTM (SGN) Cloud Platform, the backbone of Todyl’s SASE module, to a hosted server in the client’s data center.

The SGN features Zero Trust Network Access (ZTNA). This capability enables organizations to securely access resources from everywhere over fast, secure, and reliable connections. In this case, Genuine configured SASE with ZTNA, so the client can only access the data center over the SGN, helping to greatly reduce the attack surface area by eliminating public-facing access to the datacenter.

For this testing scenario, it is assumed that the threat actor gained access to the client’s network. The goal is to determine what data they can exfiltrate, where they can move laterally, and what payloads and executables they could run on the device. Assumed breaches give Genuine a comprehensive assessment of any internal network vulnerabilities from the perspective of a threat actor.

To start the assumed breach, Ernest shipped a laptop and user log-in directly to the tester, who started executing multiple payloads and executables to bypass Todyl’s Endpoint Security and gain persistent access. The Malware Prevention in Todyl’s NGAV module blocked the first payload, and within 10 minutes, the Managed Extended Detection & Response (MXDR) team alerted Ernest in Slack, unaware that a penetration test was taking place.

The MXDR team gave Ernest a play-by-play of the tester’s attempts, including the host’s name, path, and parent process. During their investigation, the team uncovered an unknown hash for the binary “Windows_Update.exe.” This file was not signed by Microsoft and was not recognizable by any reputation-based hash lookup services.

Unrecognizable hashes can be associated with custom payloads and are frequently leveraged to avoid detection by traditional anti-virus applications, as well as SIEMs that rely solely on static indicators. Since Todyl's Endpoint Security and SIEM leverage an advanced detection and analysis engine, our platform identified and prevented attempts to launch this malware. The platform also prevented any malicious behaviors that can indicate an attack is in progress.

Based on this knowledge, the team informed Ernest that it was suspected malware, as shown in Figure 1 below. 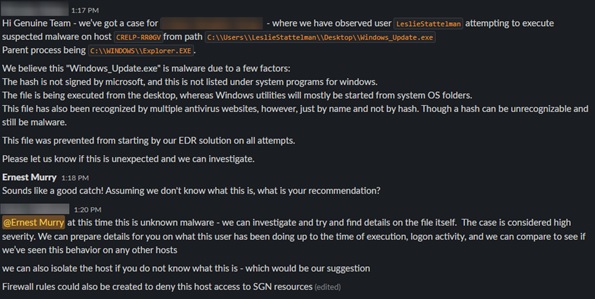 Figure 1: Todyl’s team alerts Ernest of the suspicious activity with recommendations on how to move forward.

The MXDR team provided recommendations on how to respond, including isolating the host and implementing SGN Firewall rules to deny this host access to resources in the datacenter. SGN Firewall rules block all communication to and from the SGN, preventing access to the internet, data center, and other internal resources. This enables a safe investigation while mitigating the risk of lateral movement.

While communicating with Ernest via Slack, the team continued investigating and monitoring the host’s actions to see if similar activity occurred on other hosts within the client.

Eventually, Ernest informed the MXDR team that this was part of a penetration test. Seizing the opportunity to practice with a real-world exercise, the MXDR continued to alert on and investigate every attempt.

Even with full physical system access and admin rights, Todyl’s Endpoint Security blocked the tester’s every move, and the MXDR team traced, tracked, and flagged all activity directly to Genuine via Slack (see Figures 2, 3, & 4 below).

Figure 2: The team continues to provide detailed alerts of all suspicious activity.

Figure 3: The team notices the tester has admin authority.

Figure 4: The team provides details of exactly what the tester tries to run and when, as well as how we respond.

What the Results Mean for Genuine

The results demonstrated that the layers of security Genuine implemented using the Todyl Security Platform performed as expected.

Throughout the test, Todyl’s MDXR team received 42 alerts as the tester tried different payloads and executables to break in, move laterally, and gain access to the data center. Despite all their efforts, the tester could not move laterally from the provided laptop, highlighting the effectiveness of combining Todyl’s integrated Endpoint Security with hands-on, expert support from Todyl’s MXDR team.

When a major client relationship and business reputation are at stake, real-time detections, comprehensive visibility, and continuous support from a team of dedicated security specialists are key. This level of engagement and expertise gave Genuine Technology Group confidence that Todyl would be there every step of the way during an attack.